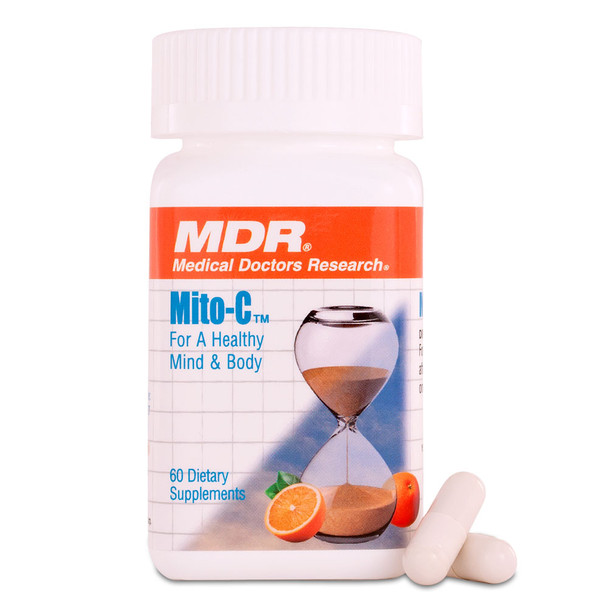 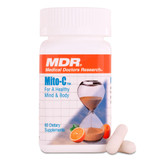 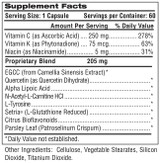 Professor Emeritus Roc Ordman made world news with his Vitamin C discoveries years ago. Now, after extensive research with MDR, he brings us the NEXT LEVEL VITAMIN C!

The Mito-C formula was designed to promote aging healthy, maintain the brain, and mimic the benefits of caloric restriction. It is based on the work of Professor Emeritus Roc Ordman. It is best to take Mito-C once in the morning and again at night. That keeps vitamin C protection consistent for 24 hours. Each capsule contains key nutrients such as:

Vitamin C
Based on research [1], this supports near the highest concentration of this antioxidant in your blood around the clock when taken twice a day. 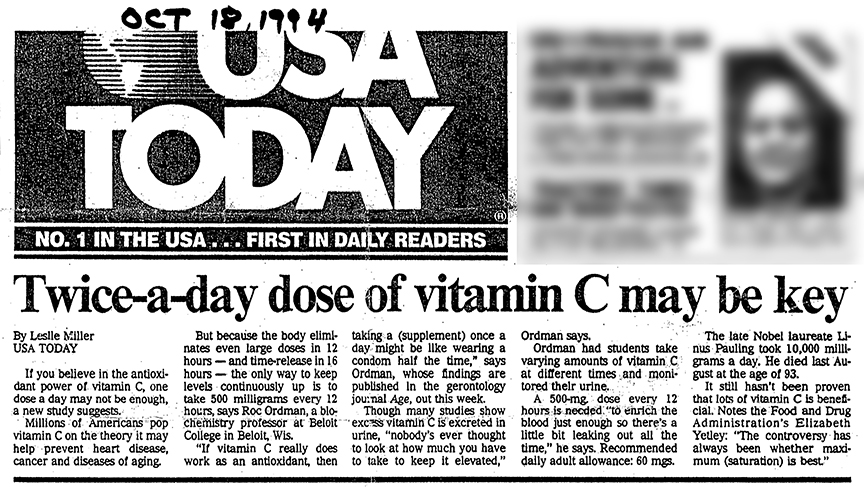 Quercetin and EGCG
Eating blueberries followed by a cup of green tea were evaluated in a clinical trial designed by ProfRoc and a colleague. The key nutrients are quercetin and EGCG. Together they are able reduce protein misfolding, one of the main causes of aging and mental deterioration. Quercetin delays the degradation of EGCG [2]. This makes it possible that the product will provide the EGCG benefit of drinking multiple cups of green tea. There has been shown to be a linear relationship between cups of green tea consumed daily and health [3]. And in 2019, it has been shown that slowing the rate of protein synthesis, as EGCG does, has the same effects as dietary restriction and has numerous health benefits [11].

Alpha-lipoic Acid (ALA), Niacinamide, and N-acetyl-carnitine (NAC)
Three nutrients vital to the powerhouses of our cells, mitochondria, that diminish as we age. NAC transports fatty acids into the mitochondrion, and ALA aids their degradation to generate energy. Dr. Bruce Ames showed this combination rejuvenated old mice, restoring their energy to run on an exercise wheel and mental function to navigate and remember a maze. The third nutrient we need, as reported in Science [10], is Niacinamide, which makes NAD+. The level of NAD+ drops substantially as we age.

Glutathione
One of the body’s most powerful antioxidants. A major function of vitamin C is to keep glutathione in its reduced form to quench free radicals. It also provides cysteine [9].

Bioflavonoids, including Quercetin and Apigenin
These molecules inhibit CD 38, also known as cyclic ADP ribose hydrolase, a glycoprotein found on the surface of many immune cells and the main reducer of NAD+ concentration during aging [6].

Vitamin K1
Vitamin K1 is metabolized to produce K1, K2, and K3. These may have numerous health benefits such as:

Parsley Extract
The base for this capsule has numerous health benefits [12], including being a great source of apigenin [6]

Mito-C is intended to be taken with another source of vitamin C to provide a total of 500mg twice a day, such as AM/PM Fitness Tabs from MDR, (or AREDs), it is intended to provide a supplement that is safe and proven likely to prolong your health span. It does so by slowing the rate of protein misfolding, in addition to trapping free radicals and reducing inflammation. These are 3 factors that contribute to the decline that occurs with aging.

MSRP:
$49.95
Is Your Diet Deficient in Vitamins? The American Medical Association reported that most of us don't get enough vitamins from diet alone, and recommends taking a vitamin supplement.   Ten...
Options

MSRP:
$49.95
Are you under stress?There are many things that can stress your mind and body. Your diet, health status, and lifestyle can all be factors. You can be under stress if you smoke, diet, are on a...
Options

MSRP:
$49.95
Is Your Diet Deficient in Vitamins? The American Medical Association reported that most of us don't get enough vitamins from diet alone, and recommends taking a vitamin supplement. 10 Reasons You...
Options

MSRP:
$19.95
Put Your Immune System OnGuard® Today we are under attack! A strong immune system is crucial. But, how good is your immune system? Many things can weaken your immunity: If you don't eat...
Options

MSRP:
$69.95
So Different, We Hold A Patent On The Formula! (#5,976,568) Medical Doctors Research has developed a superior formula containing nutrients that support healthy heart function and circulation...
Options

MSRP:
$44.95
OUT-OF-STOCK: A new and improved formulation of Longevity Antioxidants is in development. In the meantime, we recommend VitalFactors for peak anti-aging performance. The Natural Path to Good Health...

MSRP:
$69.95
ChondroPro Healthy Joint Duo works "inside and out" to help you feel good again! Inside: The Chondro-Pro supplement nourishes cartilage cells with compounds essential for healthy joint function...
Options

MSRP:
$29.95
A Youthful Mind and Body!Resveratrol is a powerful antioxidant that helps prevent free radical damage, which can lead to the premature aging of cells. Resveratrol is such a powerful protector of...
Options